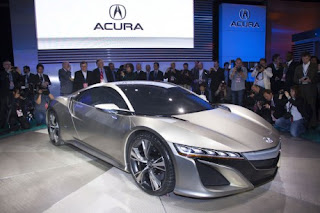 The sports car lovers certainly will not miss the All New Honda NSX. As one of the iconic sports car, the presence of the All-New Honda NSX is well worth the wait after the Honda NSX stopped production in 2005.
In the UK, Honda dealers harvest orders the All-New Honda NSX. Honda recorded more than 20
people interested and do a deposit of £ 5,000 per person or about USD 74 million per person.
"We are very pleased to All-New Honda NSX got a very good despite the all-new production version of the new Honda NSX could be seen in two years. Our price is not yet determined, "said Phil Crossman, Managing Director, Honda UK.
All-New NSX concept first appeared in Detroit Motor Show 2012. This sports car developed by experts and designers rekyasa benkerja in 2 Honda R & D facility in Los Angeles America and Raymond. Will be manufactured in Ohio.
Integrated with the Honda V6 engine direct injection system plus Sport Hybrid SH-AWD (Super Handling All-Wheel Drive). Reinforced by two electric motors.
Prototype NS-X sports car was first exhibited at the Chicago Auto Show 1989 (February). Began in August 1990, Honda NSX sold in the United States with the Acura emblem.
In July 2005, Honda announced the termination of production of the first generation NSX, but at the same time they're developing a successor reported. Until 2005, the total population of the NSX reach 18 thousand units.