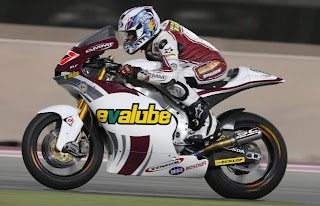 INDONESIA - Rafid Topan Sucipto, rider pride of Indonesia, which is sponsored by the Tire Zeneos Evalube and perform a variety of physical preparation and training ahead of the second series Moto2 2013. Rafid will appear at the Circuit of the
Americas, Austin, on 21 April 2013.
Based on the information submitted by Dyan Dilato as Personal Manager Rafid Topan Sucipto, after Qatar MotoGP Rafid Topan Sucipto was in Spain and did a variety of preparations ahead of the second series in Austin. To improve the performance of Cyclone, a complete physical exercise such as gym, sepedaan, ran 10 miles, supermoto every day, Sit Up, Push Up, Squath Jump, Back Up, Arm Pump, Bench Press, Skipping and tredmill, who trained directly by Trainer prepared by QMMF team.
To understand the character of the track circuit in Austin this year for the first time entered the MotoGP calendar, Rafid Topan trying to learn the track layout of Youtube featuring the official MotoGP test in Austin, including how the racing line as well as the Austin track map visualization in detail.
"Facing second Moto2 series in Austin, Cyclone Rafid intensive physical exercise to support the increase in performance during the race. To keep up with the world level rider-rider is not easy because it takes time and a minimum of 3 years experience and Typhoon still need to learn and keep learning. "Said Dyan Dilato" Rafid will look up to face the Moto2 riders in the U.S. in 2013.
"My personal target on the second series race in Austin, Texas, was able to finish and achieve a better position than before. We ask your prayers and support of the people of Indonesia in order to provide the best performance "Said Rafid Topan". any recipe from pther country you can see at easy food recipe